When ordering, you pay only a 50% deposit. The rest has to be paid before shipment.

If you are not satisfied with your purchase, you can return the products within 14 days and we refund your payment.

All honey extractors are tested before they come out of the factory to guarantee their proper functioning.

Honey extractors have up to 2 years warranty. 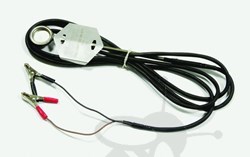 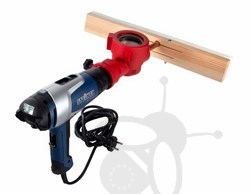 The oxalic acid evaporator can handle 60 to 80 beehives per hour. The smoke of oxalic acid fills the entire hive, all the surfaces, so that the bees are covered with a very thin layer of the crystals of oxalic acid. The bees do not harm these fine crystals, but they are deadly to the Varroa mite.
410,77 € 423,10 € 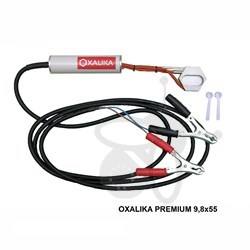 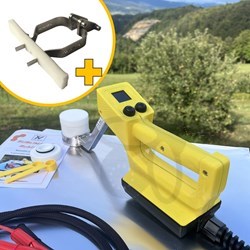 Sublimation of Oxalic Acid and Its Benefits in Bee-keeping

The use of oxalic acid is one of the most effective and safest ways of exterminating pest that often attacks the bees. Parasitic mites known as Varroa destructor attach to the bodies of the bees and their larvae, the same way ticks do. Once they are attached, they suck the haemolymph from their bodies, exhausting them to a point where they can die off from exhaustion. This understandably causes lots of damage in the bee hive, so bee-keepers try to avoid Varroa mites attacks at all costs.

Oxalic acid can be an important and efficient weapon in this fight. When used by a skilled and well-trained bee-keeper, it can help safely exterminate the Varroa mites. There are two additional benefits to this process. First, there’s only a minimal chance that the Varroa mites could become resistant to this type of acid. And second, the use of oxalic acid does not leave any harmful residue in bee products. Oxalic acid is therefore something a bee-keeper simply cannot do without. Let’s take a look at how exactly it works, how we use it and what kind of results we can hope to achieve.

Getting to Know the Enemy: What are the Varroa destructor Mites and Why Are They Dangerous to Bees?

Varroa destructor are parasitic mites that attack honey bees. Bees are often targets of a number of different parasites, as well as various illnesses. However, Varroa destructor remains the greatest worry of all bee-keepers, as these parasites cause the most damage in bee hives.

Varroa destructor have been attacking bee hives for decades and are becoming an increasingly worrisome problem that requires decisive actions. Varroosis has now become a chronic illness of bees that an attentive bee-keeper simply cannot ignore. Over the years, many different methods of Varroa extermination have been used; some have been more efficient, others less. In most cases, they have become less efficient over time, and they also often left harmful residue in honey.

Due to all this, a need for a new, more efficient and safer approach to Varroa extermination has appeared. The main goal of all these measures has been the well-being of bees, safety of the bee-keeper and safe, irreproachable honey of superb quality. This is why modern bee-keeping has mostly been turning to extermination of Varroa with oxalic acid, as it brings excellent results and provides increased safety.

Use of oxalic acid has turned out to be a very good method of extermination of Varroa, as it boasts high efficiency and extreme safety. It can be used in different ways; namely, there are five different methods of using oxalic acid to exterminate Varroa mites. Bee-keepers most commonly use three of these methods, which are very different in terms of efficiency.

These three methods of using oxalic acid for extermination of Varroa mites are the trickle method, the spray method and the sublimation/vaporisation method. Ever since the invention of special machines for sublimation, known as sublimators, sublimation has become a very popular choice for use of oxalic acid in Varroa mites extermination. This is surely also supported by the fact that this method brings a number of additional benefits.

What Is Oxalic Acid Sublimation and How Does It Work?

To understand the process of sublimation, we must first understand some basics of chemistry. In normal conditions, chemical elements and compounds appear in three different states of matter at different temperatures. Transition of phases from solid to gas state of matter usually requires a transition to liquid state first. Some compounds are an exception to that rule, which means that they can transition directly from solid to gas state of matter at a certain pressure. Oxalic acid is one of such compounds. 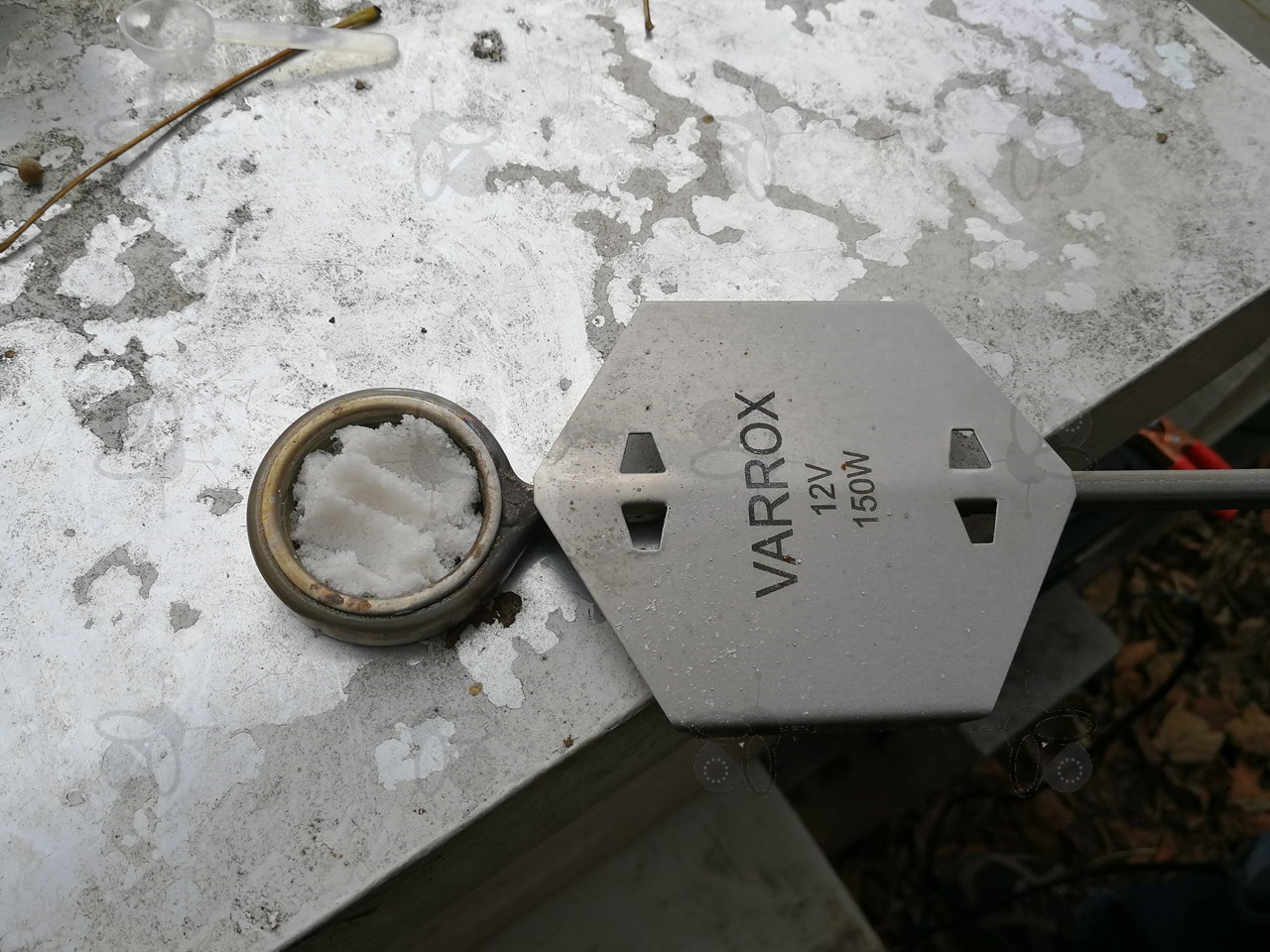 Increasing the temperature of oxalic acid thus leads to direct transition from solid state of matter to gas. In the process of sublimation, vapour of oxalic acid ascends into the bee hive, where it evenly distributes across the bees. This leaves the bees covered with a thin layer of crystals. The crystals efficiently destroy the Varroa mites, but at the same time don’t weaken the bees. However, the crystals understandably don’t only end up on the bees, but also on all other parts of the bee hives: on its walls, on honeycombs and all other parts. During the winter, when the concentration of humidity in the bee hive is higher, these crystals gradually melt and over time disappear completely.

We already mentioned that using sublimation when exterminating Varroa mites with oxalic acid brings numerous benefits, so now it’s time to take a look at these benefits in more detail.

This is of course very important, since opening the bee hives can be a very time-consuming process, and it can also cool down the bees in the process.

Different Types of Sublimators and How They Function

To efficiently carry out the process of oxalic acid sublimation, the most important thing is that it takes place in the temperature interval between 160 °C and 190 °C. This is the interval in which sublimation is most effective. In the process of sublimation, we use special devices known as sublimators; they can be separated into two different groups. The first group is the passive sublimators that increase the temperature of the oxalic acid directly in the beehive, and the second group is active sublimators that are located outside the bee hive and only supply vapour of oxalic acid to the bee hive.

The efficiency and safety of individual sublimation devices depends on a number of factors. The main ones are construction of the sublimator, the possibility to regulate the temperature and a good, even distribution of oxalic acid vapour all across the bee hive and bee family.

We have already mentioned that using oxalic acid is a very safe way of Varroa mites extermination, but it is still important to pay some attention to selecting the correct type of oxalic acid. According to regulations, only products that are registered in the EU can be used in the European Union area. Following this rule is also the best way to ensure that Varroa mites extermination will be safe for the bees as well as for the bee-keeper, while keeping the honey irreproachable at the same time.

Why is Varroa mites extermination necessary?

Mostly because Varroa mites are extremely harmful parasites that can cause a lot of damage in the bee hive. A Varroa mites attack can cause the death of entire bee families, which is of course every bee-keeper’s worst nightmare. Apart from that, this kind of bee demise can also be a huge economical issue.

Is use of oxalic acid the only way for Varroa mites extermination?

No, it is not, we know a couple of other ways. In the past, Varroa mites extermination was mostly done with the help of synthetic acaricides. However, this technique unfortunately left some residue in the bee products, which is of course far from optimal. This is also the main reason why modern bee-keeping has mostly been turning to oxalic acid for Varroa mites extermination in the recent years.

Why is sublimation the most recommendable method of Varroa mites extermination?

Experience has shown that sublimation delivers the best results when it comes to using oxalic acid for Varroa mites extermination. With sublimation, the vapour of oxalic acid evenly distributes all across the bees and at the same time doesn’t cause weakening of the bee families, which means that more bees are preserved. In cases in which sublimation method has been used, the number of bees in the bee family in the spring was 17.5% higher in comparison to cases in which the trickle method has been used. Apart from that, the method of sublimation can significantly decrease the use of oxalic acid; when using sublimation, you can use oxalic acid more times than with other methods. And the most important thing: sublimation is significantly more effective. If it’s done right, sublimation can kill more than 50% of all Varroa mites in the bee hive, while when using the trickle method, this number is only about 25%.

When is the best time for Varroa mites extermination?

All Varroa mites extermination methods should be used during the period of time when the bee family does not have its brood. Experience has shown that oxalic acid cannot destroy the Varroa mites located in the covered bee brood. To make sure that the effect of the vapour in the sublimation process is as effective as possible, you should carry out the process when the external temperatures are between 5 and 8 °C. The sublimation process itself must last for at least 2 minutes.

How quickly does the oxalic acid work?

Yes, very effective. Research has shown that oxalic acid, when used during the right period of time and in the correct way, can be up to 99% efficient in Varroa mites extermination. In the hands of an experienced and precise bee-keeper, oxalic acid is an extremely efficient and useful weapon in the fight against Varroa mites.

Can oxalic acid be dangerous to bees or people?

Oxalic acid is not dangerous to health of people or bees, which is also the main reason why it has become the first method of choice for Varroa mites extermination in modern bee-keeping. Its safety is probably best illustrated by the fact that oxalic acid is a natural ingredient in a number of different plants; lots of it can be found in rhubarb, parsley, spinach and chives. Oxalic acid is also a natural ingredient of honey, we can find lots of it in forest honey. Despite the fact that oxalic acid is safe, it is still recommended that bee-keepers protect themselves from the vapour that is the product of oxalic acid sublimation, The best course of action is to use gloves, protective glasses and face masks with a gas filter. Of course, all other usual protective measures have to be taken as well. But the fact is that the sublimators can do their work without the need to have a bee-keeper present. This means that the bee-keeper can move away from the bee hive and continue working once the sublimation process is over.